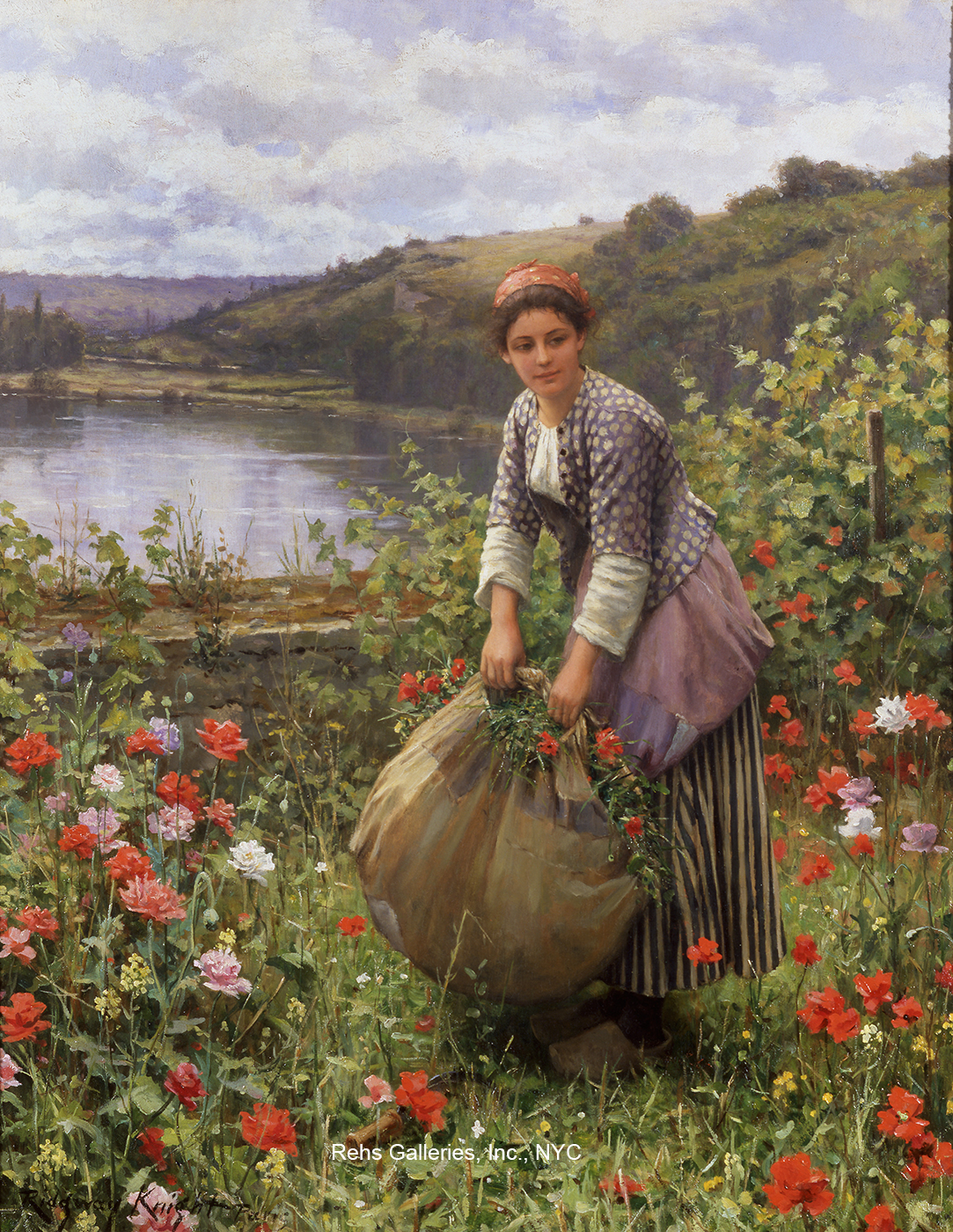 REHS GALLERIES, INC. is currently preparing a catalogue raisonné on the American artist Daniel Ridgway Knight (1839 - 1924). In conjunction with the preparation of the catalogue the gallery is conducting a search for sources, written documentation, photographs and any other pertinent information relating to the art of Knight.

Ridgway Knight was born in Pennsylvania in 1839. He attended the Pennsylvania Academy of the Fine Arts from 1858 - 1861 and then traveled to Paris and studied at the Atelier Gleyre and with Cabanel at the Ecole des Beaux-Arts from 1861 - 1863. Knight returned to America to serve in the Army; he met and married Rebecca Webster and in 1871 he and his bride returned to France -where they remained for the rest of their lives.

By 1873 Knight moved to Poissy - a rural area just outside of Paris. It was there that he found the subject matter that would occupy him for the rest of his life - the French farm laborer.

A writer in the May1876 edition of the Art Journal writes about Knight's Salon painting entitled The French Washerwomen: "...the figures are drawn with remarkable spirit, and in their delineation much grace of form is show. It is without that artificial feeling which belongs to work where the conventional model is called into requisition." It was this ability to portray the human figure so naturally that made Knight so popular not only in his own lifetime, but even today.

Knight's most memorable images come from the time he spent in Rolleboise - after 1896. Here he coupled his beautiful models with the lush landscapes and gardens around his home - creating many of his most highly sought after works.

Anyone who has information concerning the artist's life, or owns a work by the artist, is asked to contact the gallery.  All information will be kept strictly confidential.

All information and images displayed on this web site are the property of Rehs Galleries, Inc.
and may not be reproduced in any manner or from without the express written permission of Rehs Galleries. Inc.

Rehs Galleries, Inc. is committed to providing digital services, including its websites, that are available to the widest possible audience and in accordance with accessibility standards, and is engaged in continued efforts to ensure that this website is accessible to those with special needs, including those with visual, hearing, cognitive and motor impairments. If you come across a page or feature you find inaccessible or difficult to use, or if you require or desire assistance, please contact us at: [email protected] (212) 355-5710. We thank you for your interest in our services.